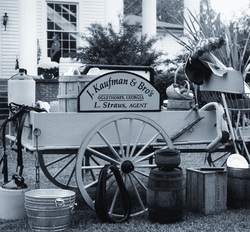 A peddler's cart in rural Oglethorpe, GA
When I first began working for the Straus family in 1990, I learned about a man from Macon, GA who was a descendant of Moises Lazarus. He and a cousin in CA had been working on his family's genealogy for more than twenty years. Although circumstantial evidence seemed to indicate that the two families were related, no amount of research could prove it.

Their great grandmother Magdelena Tuteur married Moises Straus, son of Moises Lazarus. Moises Straus didn't carry his father's last name. But Jews were not required to take last names until 1808. In fact, the only name we have for the progenitor of the Lazarus Straus family is Lazarus. His grandson was known as Jacob Lazarus (or Jacques Loesser) before last names were required. In 1808 he chose to be called Jakob Straus. Given this information, one could easily conjecture that Moises Lazarus and Jacob Lazarus were related.

All nine of Magdelena and Moises Straus' children were born in Otterberg Germany. Magdelena's husband Moises died in 1854. In 1857 she brought her four younger children, Matilda, Jacob, Theresa and Abraham to the United States on the ship "Trenton" from Le Havre. They landed in New York on July 21, 1857. Daughter Fannie arrived in 1859. It is possible Magdelena's older children were already married and chose to remain in Germany.
When Lazarus Straus came to America, he settled in GA. The Kaufman brothers gave him his first job selling from a pushcart in rural Oglethorpe GA in 1852. Within a short time Lazarus decided to open a dry goods shop in the larger town of Talbotton, the Talbot County seat. The Kaufman brothers became his partners. Julius Kaufman worked in the Talbotton store with Lazarus. Jacob Kaufman worked in a similar dry goods store in nearby Carsonville.

After arriving in the United States and moving to GA, Fannie Straus, daughter of Moises and Magdelena married Jacob Kaufman in 1860 in Talbot County, GA. Family lore tells us that they were married at the home of Lazarus Straus. Matilda Straus married Julius Kaufman in 1870. They are said to have married at the home of Hermine and Lazarus Kohns. Hermine was the daughter of Lazarus and Sara Straus. Abraham, the son of Moises and Magdelena, followed his sisters to Columbus GA where he married Theresa Stern. Several descendants of these families still live in GA.

Although no "paper trail" has been uncovered, the descendants of Moises Lazarus have heard stories throughout their lives about the close relationship between the two families. Many of them have been told about their ancestors visiting with "Uncle Nathan" or "Uncle Isidor" in New York. Some have gifts given to family members. Until recently, no one had been able to prove what seemed so obvious to so many. A simple DNA test has given us that proof.

It is necessary for two males, one from each of the families, to contribute a DNA sample. Each male must be descended from a purely male line: a son from a father from a grandfather, etc. The two men ran test swabs around the inside of their cheek, sealed the swabs inside a small tube, and sent them to the DNA testing company. 25 markers were tested for compatibility.

Each male inherits half his chromosomes from his father and half from his mother. The mother has two sex determinant X chromosomes and the father has an X and a Y. If the father contributes the Y chromosome, the child will be male. He, in turn, contributes his Y chromosome to his son. This Y chromosome has the same genetic material as the one he inherited from his father and grandfather and great grandfather. It is passed on for generations. The only change comes when there are mutations. Scientists have figured out the rate of mutation, about once every 500 years, and factor it into this DNA test.

When they came up with the result that the Moises Lazarus family and the Lazarus Straus family originate from the same progenitor, they can say it with a great degree of certainty. There is a 99.9% chance that the two families are related. 25 out of 25 DNA markers match. And there is a 95% chance that the most common ancestor happened within the past 175 years.

Where do we go from here? Now that we are certain of the connection, it becomes even more important to find the paper trail. We will be looking for vital records for the time before Moises Lazarus. Although the Lazarus Straus family has information going back nine generations from the DNA test subject, the Moises Lazarus family has information for only six generations back from their test subject.