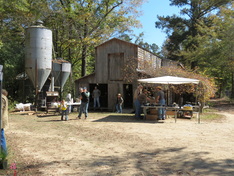 Talbot County was created in 1827 and the wave of new settlers brought their families there in search of farm land. One of the oldest continuous businesses in Talbot County is the Fielder's Water Power Grist Mill. During "Harvest Days in Old Talbot," visitors saw the mill grinding meal, flour, and grist and were able to see an original Draper Loom. Up the hill is the 1840 Greek Revival home originally built in Talbotton by John W. Attaway, later known as the Daniel, Raines, Passmore Place. The downstairs of this historical home was open to tours. Many other demonstrations, exhibits, vendors and activities were available.

Joan and Catherine set up photographs, books and other informational materials in the dining room. During the weekend, over 300 people passed through the property to enjoy the old world charm of this incredible Georgia home.

On Sunday, Joan and Catherine took Oscar on a tour of Talbotton. They passed by the Zion Episcopal Church which would have been right down the street from where the Straus family lived. They also visited Straus-LeVert Memorial Hall right across the street from the church. In addition, they drove to the original home site where Lazarus Straus and his family lived as well as the site of the store where L. Straus & Co. first existed.

Thank you to Mike & Debbie Buckner for sponsoring the SHS in Georgia! We hope to return again next year to celebrate the Straus Family's rich heritage!
Launch Party for the Straus Room at Rutgers University
October 2014 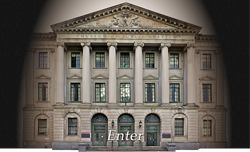 ﻿The Straus Historical Society and the Rutgers University School of Public Affairs and Administration in Newark are pleased to announce the addition of the exhibit The Straus Family: A History of Public Service and Philanthropy to the Virtual Museum of Public Service. This room contains exhibits about the Straus family's involvement in Public Service and includes photographs, stories, and links to information about various family members.

To mark this occasion, Rutgers University in Newark hosted a launch party for the Virtual Museum of Public Service. On October 7th, from 6 to 7:30 pm, guests gathered in the School of Public Affairs and Administration building on the Third floor where hors d'oeuvres and refreshments were served. The walls were lined with photographs and text from the Straus exhibit in the virtual museum. In addition, a screen in the conference room displayed a loop of supplemental photographs. Many Straus family members, historians and members of the Rutgers University community attended.

The group then gathered in the conference room where Dean Marc Holzer of the School of Public Affairs and Administration greeted and thanked all those in attendance. He explained the Virtual Museum and the Straus family's association with Public Service. He then introduce Joan Adler, Executive Director of SHS who discussed the Straus' connection with New Jersey and the importance of the Society's partnership with Rutgers University. Oscar S. Straus III, the Chairman of the Board of Directors of SHS, spoke about his legacy as a Straus descendant. Finally, Al Berr, a member of the SHS board, spoke about his connection with SHS and Dean Marc Holzer. The guests then returned to the hall where they enjoyed some dessert.

Throughout the evening, the event was streamed live and was available to be seen worldwide. A video of the event will be posted shortly. We would like to thank Dean Marc Holzer, Elizabeth Hall, Hilary Halliwell, and all those who helped put this event together. We believe it was a successful launch and hope that everyone will now go visit the Straus Room in the Virtual Museum of Public Service.
The Straus Historical Society in Chicago
September 2014
In September of 2014, Joan Adler and Catherine Smith were invited to Chicago for a series of events and presentations relating to the history of the Straus Family. The followin﻿g events took place between September 12th and September 14th.
﻿
The Standard Club 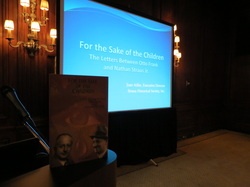 On Friday, September 12th, The Standard Club hosted a Lunch & Learn presentation by Joan Adler about her book For the Sake of the Children: The Letters between Otto Frank and Nathan Straus Jr. The reception began 11:30 with a lovely lunch. Joan began her presentation at noon and the audience was extremely interested. Following the presentation was a quick Q&A session and Joan was available to sign books.

Image Courtesy of Congregation Sukkat Shalom
Later in the evening on September 12th, Congregation Sukkat Shalom hosted a presentation by Joan Adler about her book For the Sake of the Children: The Letters between Otto Frank and Nathan Straus Jr. The program was held during evening services at the synagogue. Joan spoke for about a half an hour accompanied by an informative powerpoint. After services concluded, the congregation and guests gathered for dessert and Joan was available to answer questions and sign books.

Thank you to Sukkat Shalom and Rabbi Sam Gordon! We hope to continue this relationship and look forward to returning again in the future.
B'nai Yehuda Beth Sholom & Congregation Am Echad 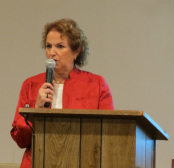 On Saturday, September 13th, B'nai Yehuda Beth Sholom and Congregation Am Echad jointly hosted presentation by Joan Adler entitled "The Remarkable Straus Family Saga." The presentation began at 1:30 in the sanctuary and was attended by over 100 people. Joan spoke about the Straus family while photographs were passed around the crowd. After her presentation, Joan answered audience questions and then invited the guests to join her for dessert. 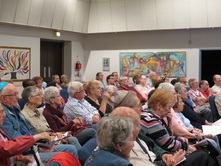 On Sunday, September 14th, B'nai Yehuda Beth Sholom and Congregation Am Echad jointly hosted a second presentation by Joan Adler about her book For the Sake of the Children: The Letters between Otto Frank and Nathan Straus Jr. The presentation began at 1:30. Joan spoke as a powerpoint played behind her. The audience had thoughtful questions that Joan answered after the conclusion of her presentation. Joan was then available to sign books as dessert was served to those who attended.

A huge thank you to B'nai Yehuda Beth Sholom & Congregation Am Echad for jointly hosting SHS. Brian Zakem and Ellen Kahn were the main forces behind bringing SHS to Chicago in the first place, and we are in their debt. We are truly looking forward to returning again in the Spring!
International Association of Jewish Genealogical Societies
July 2014

Image Courtesy of IAJGS
On Wednesday, July 30th, Joan Adler spoke at the IAJGS Conference in Salt Lake City about her book For the Sake of the Children: The Letters between Otto Frank and Nathan Straus Jr. The talk was attended by a receptive audience and was followed by a Q&A. Joan was very pleased with the entire conference and looks forward to attending and speaking again in the future.
Educational Alliance
June 2014 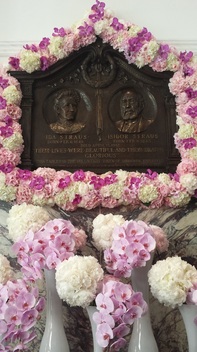 As guests gathered in the memorial entrance, they were greeted by the musical stylings of Violinist Sara Caswell. Flowers adorned the Isidor and Ida Straus Plaque to one side, and a plaque dedicated to the Macy's employees lost during World War I on the other side. In the center of the room was a ribbon of flowers that would be cut, symbolizing the officially re-dedication and opening of the Memorial Entrance. Before the ceremony began, the Great-Great-Great Granddaughter of Isidor and Ida Straus, Jenna Belabed, age 11, handed out pink carnations to all of the guests. These carnations were a tribute to Isidor, as he would often wear a pink carnation on his lapel when he was at Macy's. 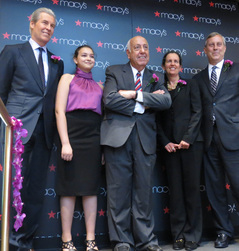 Promptly at 6:15 pm, the ceremony began with a beautiful rendition "Nearer my God to Thee." Terry Lundgren, the CEO, Chairman of the Board, President, and Director at Macy's, Inc. then spoke briefly about the legacy of Isidor Straus at Macy's. He commented on the tremendous vision the Isidor and his family had, and the intuition that caused them to move the flagship store of Macy's to Herald Square. He noted that it was with this spirit of vision that the store embarked on a massive renovation of their beloved store that was completed and marked by the re-dedication of this memorial plaque.

He then introduced Paul Kurzman, the Chairman of the Board of the Straus Historical Society and the Great-Grandson of Isidor and Ida Straus. Paul thanked all of the Macy's executives who were involved in planning the beautiful re-dedication and the guests and family members who attended. He remarked that the plaque was thought of and funded by the mournful employees of Macy's who must have had great admiration for their lost leader, Isidor Straus. He recounted his own memories of visiting the Executive Suite at Macy's to ask his "Uncle Jack" for tickets to the Grand Stand at the Macy's Thanksgiving Day Parade. Finally, he commented on the tremendous continuity, as his mother at the age of 7 unveiled the plaque in 1913, and now his own Granddaughter would cut the ribbon at this the re-dedication.

Terry Lundgren, Paul Kurzman, and Jenna Belabed then cut the flowered ribbon, officially re-dedicating the plaque and opening the memorial entrance to Macy's.

The guests were then escorted to the Executive Suite on the 13th Floor of Macy's where a small reception was held. SHS set up historical photographs and Macy's served drinks and hors d'oeuvres. Attended by over 50 guests, the Re-dedication of the Isidor and Ida Straus plaque was a lovely event.

Thank you to all who contributed and participated.

Joan Adler in Los Angeles
January 2014
Between January 4th and January 7th, Joan Adler traveled to Los Angeles for a series of presentations about her book For the Sake of the Children: The Letters Between Otto Frank and Nathan Straus Jr. Several organizations sponsored these talks and the presentations were be followed by a book signing. Copies of her book were available for purchase.
Jewish Genealogical Society of Conejo Valley and Ventura County

On Sunday, January 5th, The Jewish Genealogical Society of the Conejo Valley and Ventura County hosted a presentation by Joan Adler at Temple Adat Elohim, Thousand Oaks, CA. The presentation about Joan's new book For the Sake of the Children took place from 1:30 to 3:30 in the afternoon and was followed by a book signing. About 60 guests were in attendance and the crowd was very enthusiastic and interested. Joan inscribed several books and the afternoon was a success.
Jewish Genealogical Society of Los Angeles

On Monday, January 6th, The Jewish Genealogical Society of Los Angeles hosted a presentation by Joan Adler at The Toyota USA Automobile Museum, Torrance, CA. The presentation began at 7:30 pm and was attended by over 40 guests. Everyone was very excited about the event and Joan was invited back to talk at another venue on a future date.
Agoura Hills Library

On Tuesday, January 7th, at 6 pm, The Agoura Hills Library was scheduled to host a presentation by Joan Adler. Unfortunately, due to illness, this event had to be cancelled. Joan plans to return to California again in the future and was invited back to speak at a later date.
Return to Past Events