Videos
The Middletown Farms of Percy & Herbert Straus
April 19, 2021
On April 19th, Joan Adler gave a presentation to the Middletown (NJ) Historical Society about the Middletown estates of Percy and Herbert Straus. In the early 20th century, the Straus brothers purchased large farms in Middletown which were to serve as their country retreats. The Strauses developed the land and French Norman style buildings, much of which stands today.

Attendees learned about the history and importance of their farms, including the complex that is known as Cobble Close. The event was well attended. The guests were fascinated by the incredible photographs and stories shared by Joan, many of which were taken in 1930 during the reconstruction project.
Nathan & Lina Straus and Netanya
April 5, 2021
On April 5, 2021, Joan Adler gave a presentation to the Monday Club from Young Israel in North Netanya, Israel. Netanya, founded in 1927, was named in honor of Nathan Straus, who made many philanthropic contributions to the region. He built soup kitchens, supported workrooms so that unskilled laborers could find employment and built health stations that ministered to the victims of malaria and trachoma. He provided $250,000 for the establishment of the Jerusalem Health Center and made possible the founding of a Pasteur Institute.

This presentation was attended by more than 50 excited and interested participants. Members of the Monday Club asked fascinating questions and engaged in a vibrant discussion about Nathan and Lina Straus at the end of the presentation.
Two Great Families and Their Temple
November 18, 2020
On November 18, 2020, SHS and Leo Baeck Institute co-hosted a virtual presentation about the Straus Family, their relationship with the Lehman family, and their commitment to their synagogues, Temples Emanu-El and Beth-El.

​This unique event featured speakers Warren Klein, Joan Adler, and Karen Franklin who each provided a comprehensive and complementary history of the families and the congregations. Each spoke for about 15 minutes to an online audience of 185 attendees. The virtual chat was lively and many interesting points and questions were raised. After the presentations, the speakers answered questions from the chat, as well as live questions from attendees.
Straus Park
by Steve Frizell
This short film is a profile of the vest pocket park located on the Upper West Side of Manhattan, a block north of the house where Isidor and Ida Straus settled with their family in 1884.

Commentary by Joe Arbo, gardener for Friends of Straus Park, Gilbert Tauber of the Bloomingdale History Group and creator of oldstreets.com, and Joan Adler, Executive Director of the Straus Historical Society.
From Macy's to the Titanic: The Straus Family Legacy
April 15, 2019 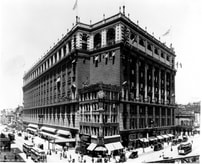 ​To read more about this event, check out the Past Events Page.
Straus Historical Society Presentation at
The Guides Association of New York City
March 2, 2016
​
On Wednesday, March 2, Joan Adler presented a program about the Straus Family and the monuments to them in New York City. This program was hosted by the Guides Association of New York City (GANYC) and was held during their Monthly Membership Meeting. The presentation took place in the Chapel of St. James in The Cathedral of St. John the Divine and was attended by well over 60 guests. The presentation was followed by a very interesting Q&A.

Thank you to Dave Gardner and Nina Mende for inviting us to speak and for helping to make this presentation such a success!

Thank you to Sandra Schon Kiferbaum, Membership Vice President, Marcey Siegel, Membership Co-chair, and Martin Fischer, Former Publicity Chair, of Jewish Genealogical Society of Illinois, and to Jerry Levin and Beverly Chubat of the Chicago Jewish Historical Society. We would also like to thank Ron Miller for providing the following video of the event.
​
To read more about this event, check out the Past Events Page.
Titanic Disaster: The Story of the Straus Family
A film by Heiko Wirtz-Walter of SWR
Documentary Released August 30, 2015
On June 17, we met with a crew from the German television station SWR who came to the U.S. to produce a documentary about Isidor & Ida Straus and the Titanic. Led by Heiko Wirtz, the crew, along with Joan and Catherine toured Straus Park and Woodlawn. They interviewed both Paul Kurzman, Great-Grandson of Isidor and Ida Straus, and Joan. On June 18, they visited the SHS archives and filmed our materials.

The documentary aired on August 30 on the German channel SWR during the program Bekannt im Land. Heiko was kind enough to send us a link to the original video and allow us to translate and subtitle the video in English. Click on the video below to view the English subtitled version.

Thank you to Heiko and his crew for all of their hard work in creating a wonderful tribute to Isidor and Ida Straus. We are honored to be included. We would also like to thank Peter Kluefer, a Straus relative, who offered to translate the video into English for us.

Enjoy!
Please make sure that the CC icon at the bottom of the video player has a red line under it - signifying the captions are on.
Straus Historical Society Presentation at
The Greens at Half Hollow
July 8, 2015
On July 8th, 2015, from 10-11 am, Joan Adler gave a presentation about the Straus Family at The Greens at Half Hollow, a community in Melville, New York. The powerpoint talk was given to the Men's Club and was attended by more than 100 men and women from the community. Following the presentation was a stirring and interesting Question and Answer session.

On Thursday, January 22, 2015, the Bloomingdale Neighborhood History Group hosted a presentation by Joan Adler. Held at 6:30 at Hostelling International, Joan presented an in depth look into the Straus family's connection to the Bloomingdale Neighborhood and their history in New York City. With over 100 people in attendance, the presentation was well received and an interesting Q&A was conducted following the talk. Joan was then available for a book signing and meet and greet. Thank you to Batya Miller, Jim Mackin, and Al Berr for facilitating this presentation.

This historic entrance, which had been closed off and shuttered from view for decades, housed two very special bronze memorial plaques mounted on each of the flanking sidewalls. One plaque commemorates Isidor and Ida Straus, who perished on the Titanic and was dedicated to the couple by grieving Macy's employees in 1913. The other honors all those Macy's employees who died in World War I.

To read more about this event, check out the 2014 Past Events Page.

On Friday, November 15th, Joan Adler presented a program on the history of the Straus Family at the Suffolk YJCC in Commack, N.Y. Beginning at 10:30 and ending at noon, the talk was attended by over 100 members and was followed by refreshments and bagels. Joan was available after the presentation for a book signing.

To read more about this event, check out the 2013 Past Events Page.

On Tuesday, November 5th, at noon, Joan Adler spoke at the Port Columbus National Civil War Naval Museum in Columbus, GA jointly hosted by the museum and the Historical Chattahoochee Commission. The presentation was followed by a light lunch and refreshments. Joan was then available to sell and sign copies of For the Sake of the Children and The Autobiography of Isidor Straus.

To read more about this event, check out the 2013 Past Events Page.

Two memorial events were held in New York City's Straus Park, one by Landmark West and another by Friends of Straus Park on Sunday, April 15, 2012. This venue is very special to the community because Isidor and Ida's home was near the Park on West 105th Street between Broadway and West End Avenue. Many family members attended. Catherine Smith brought photographs of the Strauses and of their West 105th Street home that were passed around for all to see.

To read more about this event, check out the 2012 Past Events Page.
Making Their Mark:
From German Immigrants to New York City Icons
Film released in 2009
In this film, you'll meet descendants of the families who created three enduring New York City icons: The John Roebling family and the Brooklyn Bridge, the Lazarus Straus family and Macy's department store, and the Heinrich Steinway family and the Steinway piano factory. Assimilating into an American mainstream they helped create, their lives are representative of the thousands of German-American families who have made their mark on New York City. A project for the German Consulate General New York.

Thank you to Steve Zehentner: Writer, Director, Co-editor, Street Videography and Co-Producer in collaboration with Peter Norrman and Todd Weinstein